A velvety, nocturnal drink stuffed with cherry and anise 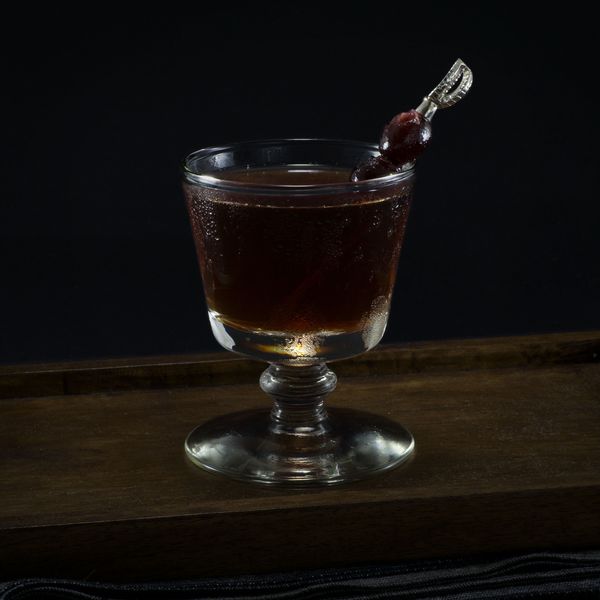 The USS Maine was an American naval ship that sunk in Havana Harbor during the Cuban revolt against Spain of 1898. The cause was subject to much speculation, but popular U.S. opinion and the rabble-rousing press blamed Spain. The phrase, "Remember the Maine, to Hell with Spain", became a rallying cry for action, which jumpstarted the Spanish-American war, eventually leading to Cuban independence. This cocktail, which shares the same name, was first put to pen by Charles H. Baker in his Gentleman’s Companion, or Around the World with Jigger, Beaker and Flask . Baker wrote about the drink in context of the 1933 Cuban Revolution. Interestingly, the 1935 Old Waldorf Astoria Bar Book prints a cocktail called McKinley’s Delight, which is nearly identical to Remember the Maine. Perhaps the McKinley Administration, who dealt with the naval disaster in 1898, provides the link.

This cocktail’s appeal goes far beyond a history lesson. It's velvety and nocturnal, making an excellent night cap or a rich way to end a rough week. The drink has a dark chocolatey profile accented by sharp anise and sweet Cherry Heering. It’s reminiscent of a cherry-chocolate mint bar, allowing drinkers to enjoy the best parts of a great confection without all the sugar. Despite these indulgent flavors, it’s lighter than one might expect. The sweet vermouth sparkles on the finish, and comes through crisply with the absinthe, which provides depth and bite. Often compared to the Manhattan and sazerac, we were immediately reminded of the Vieux Carré, due to the strong presence of vermouth and absinthe. This drink is a great twist for lovers of simple, whiskey-forward drinks.

Recipes that call for absinthe easily accommodate a substitute; here we use pastis to great success. For the base, use a solid mixing rye such as Old Overholt or Rittenhouse. We’ve also substituted bourbon when out of rye and it tastes pretty great. This drink is built for showing off a great vermouth. We recently fell in love with Vermouth Del Professore, a traditional Turin style sweet vermouth matured in oak casks. Stir it up, but don’t over mix, keep it at about 20 seconds to avoid over dilution. And finally, a note on cherries: Luxardo maraschino cherries are the common go to, but great alternatives are out there. Alternatively, you can always try making your own maraschinos, or even some brandied cherries. Just make sure to avoid those fluorescent red disasters sold at your local grocer.