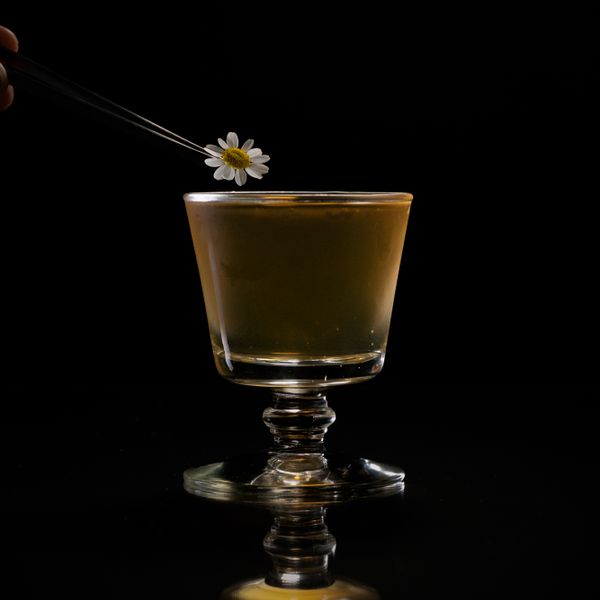 Spirit of the North, Selma Slabiak, 2018

While flipping through the pages of Selma Slabiak’s Spirit of the North, this drink’s sunny, floral presentation caught our eye, along with its use of a unique ingredient: pickled chamomile liquid. Regarding the name and inspiration, Slabiak notes that “Fionia is the Latin name of the island of Funen from which I hail—famous for its fertile land, golden summer meadows, and its mild, easygoing inhabitants”. The name and origin turned out to be perfectly apt, as this simple summery drink builds on an uncommon pairing of gin and sherry to create something fresh, bright and unique.

The Fionia's nose is full of vinegar and floral undertones from the shrubby pickled chamomile liquid and gin. Chamomile is a pretty subtle flavor, and it remains so here. First on the tongue is a sour sweetness from the pickling liquid that would likely appeal to shrub fans. Herbal tones from gin and chamomile follow, hanging around throughout. Dry sherry’s rich, nuttiness comes through on the finish to provide depth and balance. Sherry’s aged characteristics, alongside the vinegar-sugar solution’s sweetness, combine with the unaged gin to create the illusion of an aged gin, reminiscent of an old tom gin.

Pickled chamomile liquid is super easy to make, but as written in Slabiak's book, the recipe is quite large. To reduce the measure just follow the ratio of 2:2:1 if you don’t want to store significant excess. A strong vinegar flavor may not be for everyone, but don’t reduce the pickling liquid too much to avoid letting sherry take over. Slabiak’s recipe specifically calls for a dry amontillado sherry and we had great success with Lustau Los Arcos. The ingredient to play around with here is gin; a variety that amplifies the floral chamomile flavor will shine. Slabiak suggests garnishing with pickled chamomile buds, which would perhaps add more to the drink’s aroma, but fresh buds really deliver the summer vibes.

Unified by a liberal use of juniper, the gin family is one of the fundamental base spirits and a necessity in any bar
Poet's Dream: london dry gin, dry vermouth, benedictine Monkey Gland: london dry gin, orange juice, absinthe Tom Collins: old tom gin, simple syrup, lemon juice
Let's be far away friends