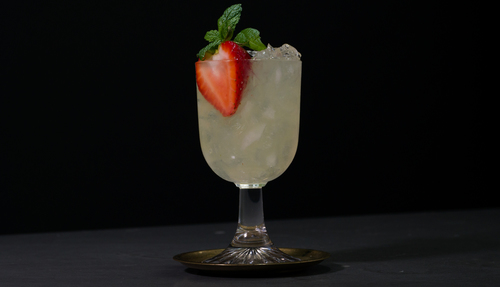 This mixture has very old roots and proof is in the name: punch is the predecessor to the cocktail, while arrack is among the oldest known distilled spirits. Batavia arrack is a funky Southeast Asian spirit based on sugarcane and rice, and named for Java’s seventeenth century Dutch-colonized capital, Batavia. Colonial trade carried the spirit West, where it established itself as an essential ingredient in punch in the eighteenth and nineteenth centuries, and eventually made its way into the seminal 1862 Bar-Tender’s Guide, which included a version of the recipe printed here. Fortunately, even in the 1887 publication, Jerry Thomas did us the favor of translating what is usually a banquet sized bowl into a recipe suitable for solo drinking.

This punch is light and refreshing, with the balance of a classic sour, but Arrack adds just a touch of something different: a funky, almost malty element, that really gives it a new feel. The nose is dominated by notes of sugarcane, the sip is sweet up front followed by a bit of sour, and the finish is more sugarcane funk. Those who enjoy the complexity of rhum agricole should give this a try. Although it shares much in common with other punches, the result is quite distinct from the rest of the cocktail canon, but perhaps this is more of a reflection of the limited options in the world of arrack based cocktails.

This recipe offers a fun exercise in old school cocktail volume conversion. As printed, the recipe originally called for one pony glass of arrack, and one wine glass of Jamaican rum. We learned the hard way that a wine glass should not be interpreted here to mean 4 ounces of rum. Using the handy table of measurements found in Imbibe, we converted the pony glass to the 1 ounce equivalent and a wine glass to 2 ounces, resulting in the recipe we’ve published here.

Batavia Arrack van Oosten is the general go to for this recipe. When it comes to the rum, go for whatever appeals to your taste, if you want something relatively tame, avoid the high proof stuff. If you’re a fan of the funk; ignore the last statement. You can skip the messy powdered sugar and use simple syrup instead. Muddling the pineapple with the lemon juice and sweetener, before adding the liquor and shaking, enables you to really make the most of the fruit’s flavor. This drink may come out a bit strong, so sweeten to taste before serving.